Apologising for failure: the new way to delight your customers

With the advent of social media and 24/7 availability culture fascinating new trends seem to emerge on a weekly (sometimes daily!) basis, a lot has been written about curation of seemingly perfect identities for individuals online and its opposite trend – more openness, and admitting that things are not quite perfect as their Instagram account might portray them.

In the business world, rather than denying or covering up their mistakes, entrepreneurs and brands are now not only much more likely to be completely open and transparent about their failures – they are increasingly using them as an opportunity to connect with their customers. While in the past companies were often reluctant to issue apologies that could potentially damage their brand image, affect share prices and invite lawsuits, modern brands are increasingly built on trust, integrity and relationships (real or perceived) with consumers.

The global nature of social media means of course there is increasingly nowhere for companies to hide in practice  – so in many ways, embracing the new normal, rather than kicking against it, seems the more sensible strategy for 2019 and beyond. And, in an era where your customers can also instantly broadcast their feelings about your company to the world in seconds, it can be argued that it’s better to respond with humility and humour than to risk a damaged reputation.

Let’s explore some examples of how companies have done this (or not!):

KFC showed us how it’s done

KFC emerged as the master of the open apology in February 2018, following the temporary closure of 600 of their UK outlets when problems with a new supplier lead to a chicken shortage – pretty critical! The company responded swiftly to its outraged (and extremely vocal) customers with immediate Twitter posts, then placed a full-page apology ad in the Sun and the Metro within the week.

The brainchild of award winning advertising agency Mother London, the ad was simple, clever and witty – and perfectly positioned for the target audience. You know the rest, but here it is in all of its glory: 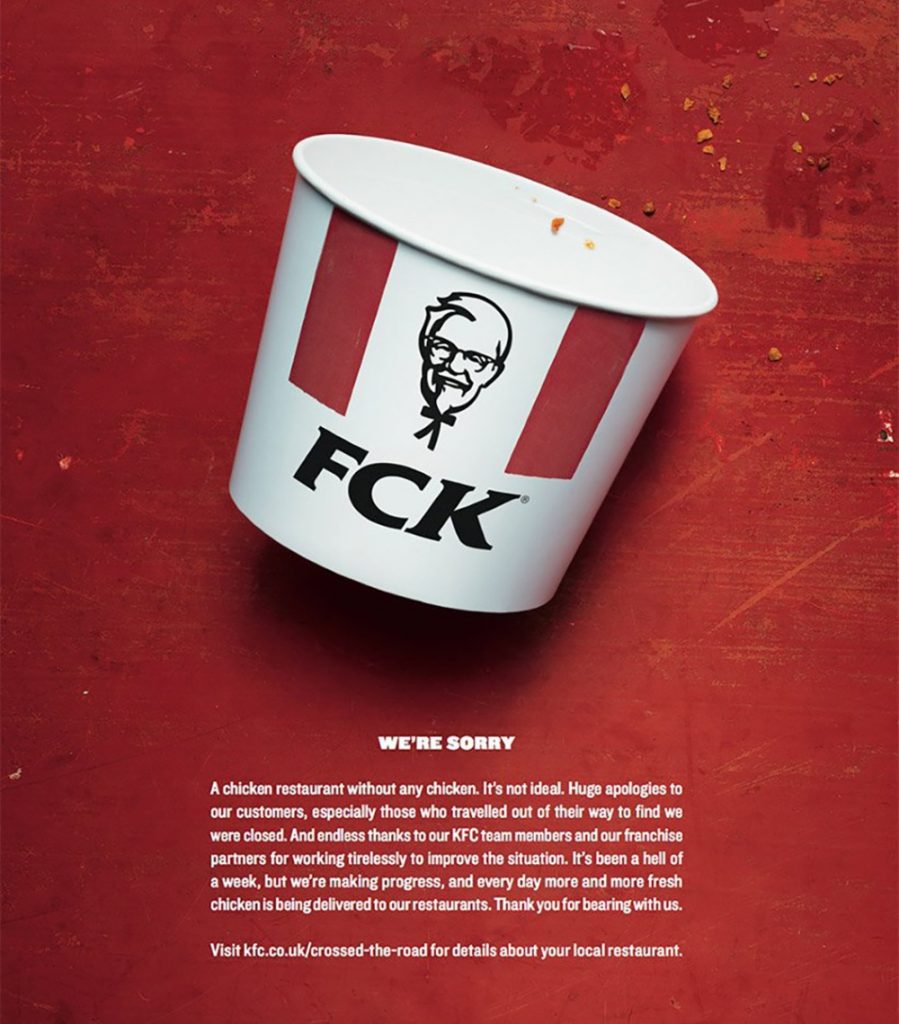 There was widespread praise for the ad from customers and the marketing industry, with founder and managing director of Frank PR Andrew Bloch tweeting that the apology was a “masterclass in PR crisis management”.

I think an underrated aspect of the response was that, although ostensibly designed with simplicity and directness at its heart, it also managed not just to quell the anger, but to deepen its relationships with its customers. I’d even argue that it opened KFC up to a new generation of consumer who would not have previously considered it before.

A high risk response tonally perhaps, but evidence the honest approach does work.

Brewdog took a typically leftfield approach to an ‘apology’ after the UK drinks industry body The Portman Group took exception to packaging for the craft beer company’s Dead Pony Club beer and issued a Retainer Alert Bulletin, instructing licensees and retailers not to place stock orders. In an apology posted on their website, Brewdog stated: “On behalf of BrewDog PLC and its 14,691 individual shareholders, I would like to issue a formal apology to the Portman Group for not giving a shit about today’s ruling”.

The humorous ‘apology’, which ends with the beautifully sarcastic, “We sincerely hope that the sarcasm of this message fits the Portman Group criteria of responsible use of humour”, was presumably intended to entertain their customer base and demonstrate an on-brand lack of respect for authority – as well as express their annoyance to The Portman Group.

Uber has arguably had an extremely difficult few years in terms of public sentiment and spotlight. After facing numerous accusations including sexual harassment, driver mistreatment and stealing trade secrets. Uber have not begun to tackle their image problem head on – for example with this short video ad featuring new CEO Dara Khosrowshahi.

The video can be argued to have all the ingredients of a sincere apology: Khosrowshahi talks directly to the camera, clearly and simply acknowledges the company’s mistakes and offers specific solutions.

The apology is clearly ‘from the top’, with the new CEO delivering the words personally. While there is a sense that his new management regime is somewhat blaming previous Uber management, the fact that these issues are being openly discussed does at least show the company is trying to move forward with a sense of responsibility and recognition despite their obvious extreme seriousness, It will be interesting to see what happens next and if this openness continues.

No blog from me would be complete without a little love towards Elon Musk, would it? As I covered in my recent Tesla blog, Musk has a long track record of openly responding to, owning and solving problems and issues. He is never afraid to admit there is a problem, and in fact seems to genuinely welcome the feedback.

Examples such as Musk’s responses to Twitter user Loic Le Meur about the overuse of a Tesla supercharger point, and to Sheryl Crow when she got stuck in a parking garage, her Tesla screen blank, both demonstrate a different way to ‘apologise’. These acknowledgements of issues faced by customers show Musk fully engaging with customers, and promising to resolve the issues.

In fact, only six days after the supercharger tweet, Tesla announced a new policy: the company’s mobile app will now alert customers once their car’s charge is nearly complete, and for every additional minute a car remains connected to the Supercharger, it will not incur a $0.40 idle fee, unless the car is moved within five minutes.

A past apology that I often reference in my speaking on this subject is when Apple used Twitter to quickly settle a payment dispute in 2015, after Taylor Swift announced she was boycotting Apple over nonpayment of artists during user trial periods.

The tech giant sent its SVP of Internet Software and Services, Eddy Cue, in to resolve the issue in two quick tweets:

#AppleMusic will pay artist for streaming, even during customer’s free trial period

We hear you @taylorswift13 and indie artists. Love, Apple

Would your company be able to respond in the same way?

Just to show how tough this apologising stuff can be, there are also numerous examples of perceived ‘misfiring’. CEO Mark Zuckerberg has a long history of other apologies, stretching back to the earliest days of the platform, so in fairness, he is trying. As another major brand under the glare of the media spotlight, Facebook response to the Cambridge Analytica data breach scandal was really interesting. Playing on customers’ nostalgia and its root, the data breach problem is mentioned, but is definitely not the focus:

You have to credit Facebook with trying (whether on not you feel they succeeded). As well as the video, they also took out full page ads in the press to issue a printed apology to their users.

The continued negative response from a proportion of its users has lead to repeated criticism of Facebook’s accountability and its attitude toward its 2-billion-plus users. However, it does still have most of those 2 billion users – who are now apparently very aware of the nature of how the company uses their data, yet continue to use the service as-is. What does this say?

Do the majority of people not care as much as a vocal minority might think? Were many actually satisfied at the explanation and not exactly surprised at what had happened? As Mr Zuckerberg said himself in his hearing – ‘Senator, we run ads’. Or has Facebook become so deeply entwined in people’s daily lives that jumping ship is simply not seen as a viable option for the majority, despite very real concerns and a lacklustre ‘apology’?

What we can learn

Plenty! Clearly there are no ‘rules’ to this, and definitely no how-to guide as clearly you have to react to the specific circumstances you are presented with. However, if we summarise some of the interesting do’s and don’ts from the above cases, a successful public apology should:

Thanks for reading and let me know what you think! Leave a comment and follow me @DrGeraintEvans_