The Four ‘C’s of Compelling Marketing Communications – are you using them?

It doesn’t matter what platform or media you are targeting in this crazy world of 2019 – the same question always applies: What do I need to do to create a successful advertising campaign for my brand? Success is an important metric to agree on beforehand of course, but typically brands are seeking views, engagement, in some cases virality, and (hopefully) a commercial outcome for their business.

It is clear from looking around the market that creative campaigns are alive and well, as demonstrated expertly in the last 12 months by top players like Apple, McDonald’s and Samsung; by challenger brands like Brewdog; and also in the not for profit sector, as exemplified by some compelling work by suicide prevention charity CALM.

There are a plethora of marketing models out there that attempt to describe the ‘how’ to do this. Those of you who regularly consume my content know I’ve got some major reservations with many of them, but one I do find useful to help frame this discussion and its key ingredients is the four ‘C’s of compelling communications. There are a number of derivations, but the 4Cs model I like to use (Clarity, Credibility, Consistency, Competitiveness) is often used in marketing communications (it was created by David Jobber and John Fahy in their 2009 book ‘Foundations of Marketing’).

I find this model is a great way to break down why some campaigns get a huge level of cut through – and why some are condemned to be forgotten, despite everyone’s hard work! Let’s explore it in more detail and look at some campaigns that may – if you agree (you don’t have to!) – hit the mark on these four points.

It’s all too often forgotten, but whatever the message you’re putting out into the world, you have to make it easy for people to understand what you’re communicating – especially in a world of competing distractions and rapidly vanishing attention spans (still with me?!). The viewer has to be able to absorb your message instantly, in the split second before they scroll past or click away. If your message isn’t coherent and easy to understand in a nanosecond, it’s almost certainly not going to mean much to your audience – or achieve your desired goal. There are some excellent examples out there that hit the mark. Here are some of my favourite examples of clarity in recent campaigns: Greenpeace Canada’s devastatingly simple ‘Don’t Suck the Life From Our Oceans’ campaign shows how much meaning can be clearly conveyed in a single image.

I also like the way product functionality is so clearly overviewed as part of the messaging in this campaign by Apple, without sacrificing excitement. It really is ‘Big news in 108 seconds’, delivered clearly and with punch:

And just to prove this Apple devotee isn’t totally biased, here is Samsung with ‘The Future is Ours to See’ – a beautifully cohesive narrative on future technology that we may be enjoying in the future (perhaps not so distant!):

Are you achieving clarity in your marketing?

Whether you’re a giant multinational corporation or a local boutique brand, consistency is key to building brand awareness. The look, feel and message of your company and what it stands for should permeate every piece of content you put out. People should grow to recognise instantly if something’s come from you, and your core message should be the same across all media. Ultimately, you’re aiming to build a cohesive effect, impact over time and instant recognition of your brand values.

A brand that is really consistent in positioning a key part of its brand – it’s highly recognisable ‘arches’ logo – is McDonalds. Consider this clever roadside billboard campaign from them: 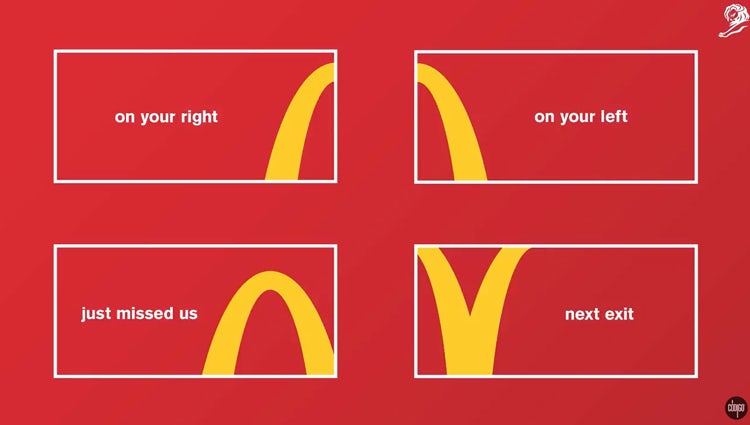 Not many brands would be able to slice up their logo in the confident knowledge that probably everyone who sees it will still recognise it. That McDonald’s can do this is largely down to their consistency over time – their use of the same three colours and distinctive shape together make for an easily recognisable visual pattern.

Mobile phone brand Three demonstrated brand consistency with their relatable ‘Phones Are Good’ campaign, putting phones into the hands of various historical figures to argue against scaremongers who claim that life was better before mobiles. The message is firmly on-brand and landed well with its audience (just read the YouTube comments!).

A complete gear shift now to take a look at this incredibly important and thought provoking offering from UK suicide prevention charity CALM (the Campaign Against Living Miserably).

Their Project 84 art installation, unveiled at the ITV tower in London in March 2018, and the short video that went with it, was perfectly in line with their message in both tone and delivery. It reached out to the local and wider community, causing people to stop in the street to look up, and start conversations in person and on social media. 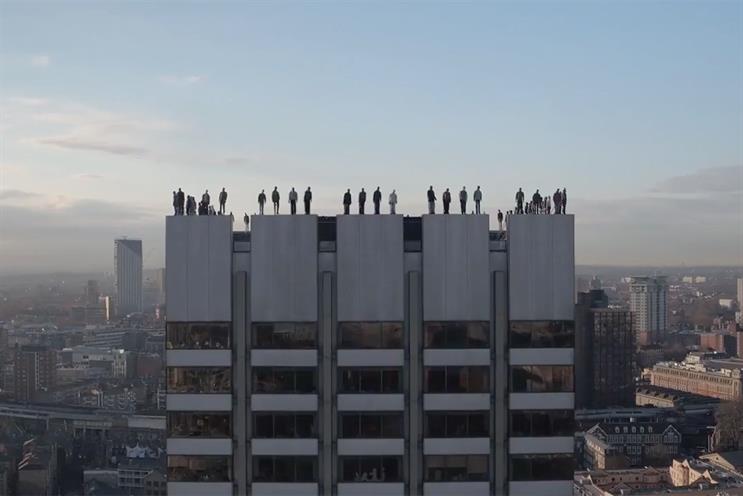 Is your marketing consistent?

I often get asked how you you build credibility as a brand? In a fast-moving, short-attention-span, post-truth society, how do you create trust and get your audience to believe in you?

One approach is to align yourself with your target audience’s values, try to be authentic and honest, and use your marketing as a platform to share a point of view in the hope that it will resonate. Billie razors have arguably pulled this off with their ‘Project Body Hair’ video, appealing to a generation of women who are fed up of a society – and media – that makes them feel pressured into looking a certain way:

Gillette famously also tried this strategy in 2018 – however, with mixed results. Their ‘We Believe – the Best a Man Can Be’ toxic masculinity campaign polarised audiences and prompted a backlash from many in their target audience. It remains to be seen whether the ad has done long term damage to the brand, or if any publicity really is good publicity (in which case I think they are doing okay!)

Used effectively, honesty and good humour can also help build significant credibility. If you’re clever – and quick – enough, it can also save a brand from a potentially extremely damaging situation, as KFC proved with their disarmingly cheeky ‘FCK’ campaign after a chicken shortage forced 600 UK stores to close in February 2018. 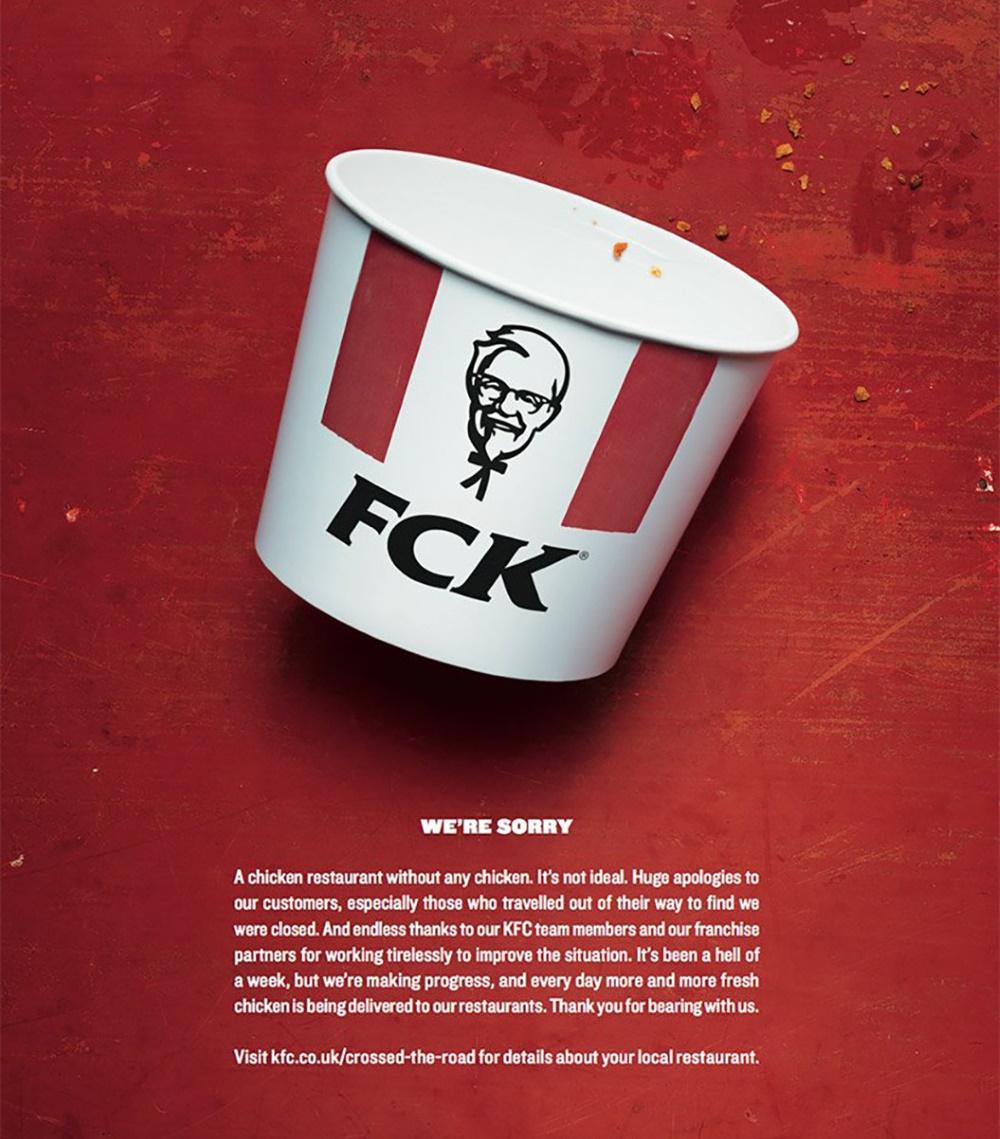 Would your brand be as brave in the face of such a crisis?

Has your brand got credibility?

The point of marketing is what? To create brand awareness, sure. But ultimately the aim is to find and keep customers – and to do that, you have to be be able to compete with others in your industry. US laundry detergent company Tide carried on a tradition of competitive laundry detergent ads with their 2018 Super Bowl ‘It’s a Tide Ad’ campaign – using humour to position themselves as their industry leader with some gentle attacks on their competition and on other adverts.

Scottish beer company BrewDog went for the direct approach with their ‘Rate My Beer’ ad, directly comparing their online taste score to competitor Budweiser’s – and adding insult to injury by throwing in a direct reference to their rival’s earlier ad campaign. 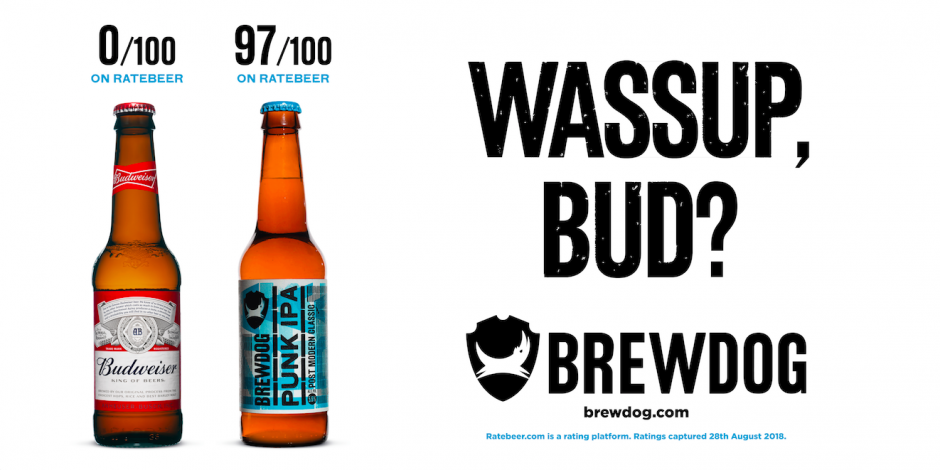 As much as it is hard for proud Wales fan to admit (just joking – we didn’t get there!), the Nike England World Cup 2018 team announcement was massively impressive, showing confidence in their message by putting it in the hands of their young fans – a bold departure from the usual delivery.

Is your brand competitive?

So to summarise – I know it’s getting harder and harder to get cut through, but it’s also easier than ever to break out and get incredible coverage of you get all four 4 C’s on point. To get there you’ll need to experiment – to be free to fail – but if you do, I know you can have amazing results.

Good luck and thanks for reading!